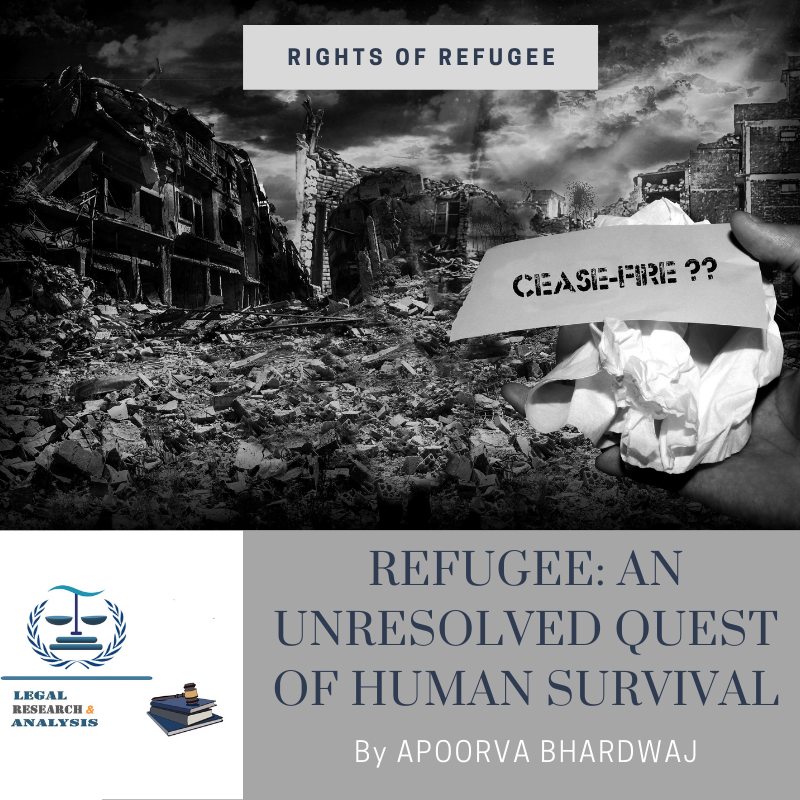 “A refugee is someone who survived and who can create the future.”

Have you ever wondered why some people literally have everything in their lives, like, from a good health to good wealth, whereas,  some people are struggling with basic human rights like right  to shelter, right to  equality, freedom from discrimination and so on , even in the 21st century. In this era of Globalization, where people are more connected to each other with the advent of technological advancement, there are people who are often forced to cross their national boundaries in order to protect their lives from war, persecution or any kind of natural disaster and seek shelter in any other country, they are known as Refugees.

The word ‘Refugee’ is a Latin word “Refugium” which suggests ‘the act of taking refuge’. This word was first used in France by the French Protestants who fled to other countries after a law protecting their religious liberty was revoked in 1685. Under the 1951 Refugee Convention, a legal document that defines the term and was signed by 145 countries, refugee is “a person who is outside his or her country of nationality or habitual residence; has a well-founded fear of being persecuted because of his or her race, religion, nationality, membership of a particular social group or political opinion; and is unable or unwilling to avail him- or herself of the protection of that country, or to return there, for fear of persecution.” This term was not officially defined till 1951 Refugee Convention in International law.

The first great Refugee crisis of the 20th century was held during the time of Second World War, where nearly 50 Million people were displaced from their native countries. After the Nazis rise to power and holocaust[1]  more than 340,000 Jews were emigrating from Germany and Austria. With the end of the war, more than 250,000 Jews became “displaced persons[2]” and were given asylum[3] in different countries.

In 2019, more than two-third of all Refugees predominantly came from 5 countries: Syria, Afghanistan, Venezuela, South Sudan and Myanmar. Today, Syria is the main origin of Refugees since 2014. There are approximately 6.6 Million hosted by 126 countries. The civil war is the foremost ground of quarrel with religious groups opposing each other ideologies, which has adversely affected the whole region which is massively influenced by International interventions.

So, what makes a refugee? And how do people become refugees?

Refugees are hording at faster rates than ever before, from every corner of the world. Surprisingly, the governments around the world are particularly more concerned about where the refugees are running instead of from what they are running from. There are 5 major reasons for people to Refuge: Persecution, War, Gender/ Sexual Orientation, Hunger and Climate Change.

In simple words, the term Persecution means unfair or cruel treatment over a long period of time race, religion or political beliefs. It is also considered as one of the most severe abuse and denial of human rights of individuals or groups. They have a well-founded fear of persecution for reasons of race, religion, nationality, political opinion or membership in a particular social group. Also, they cannot return home or are afraid to do in the fear of being killed. Persecution is not something which has evolved or emerged over a short period of time in fact the world has already encountered such cluster of events, like:

Around the world, religious refugees are everywhere, from Muslims persecuted in Myanmar to Christians persecuted in Central African Republic to Hindus in Pakistan. In the past 6 years, there have been two major atrocities which met the UN’s legal definition of Genocide[5]. To start with, in 2014, Daesh, which is an interest group of ISIS, attacked a religious minority, known as the Yazidi community, in Iraq in an attempt to destroy them and establish a purely Islamic state. There is a campaign of terror which involves murder, kidnapping, brutally raping women and young teenage girls, and also forcing them into prostitution and sexual slavery, just because they belonged to a different religious group.

Subsequently, an estimated one million Uighur Muslims, in China, have been detained in so-called “Re-education camps”, which are designed to strip them of their religious and ethnic identity and replace it with the absolute loyalty towards the Chinese government.

Religious discrimination in Pakistan is a stern human rights bone of contention. The minorities like Hindus, Christians, Sikhs, Ahmadis and others, are facing gruesome violence on a daily basis which includes force conversion of women and young girls into Islam, eventually leading marrying them, forcing them into prostitution and sexual slavery, brutally raping them.

This year France made a monumental decision at the global level, by becoming the first country, to accept a Chechen Gay refugee. On the other hand, countries like, Somalia, South Sudan, Nigeria and Yemen are facing extreme drought due to which they are forced to leave their homelands in search of stable food sources.

Most of the South Asian nation does not have national, regional or international policies for the protection of refugees. Consonantly, India does not have a statute[6] book on specific and separate law to govern the refugees, but there are certain laws made to safeguard their humanitarian rights. The existing laws in India like Indian Penal Code, the Criminal Procedure Code, the Evidence Act, are applicable to refugees as well. India is a signatory to a number of United Nations and World Conventions on human rights related issues such as the EXCOM[7] in 1995, the ICCPR[8] in 1967, the ICESCR[9] in 1976, CEDAW[10] in 1974 and many more. There are few articles of the Indian Constitution which are equally applicable to refugees.

The Partition of 1947, is contemplated as of the most famed and population exchange in the world.  The people crossed the newly formed border of India and Pakistan either by choice or forcefully, they didn’t lose their nationalities, but were forced to live as refugees. The displaced people from Pakistan used to live in refugee camps in Delhi, Punjab and Bengal, uncertain of their future. They were displaced due to ‘Social Persecution’ not because of ‘State-sponsored persecution’ or War.

The next major movement of refugees towards India was almost a decade later, after Partition, in 1959, when the Dalai Lama came along with more than 100,000 followers, fled Tibet and came to India in order to seek political asylum. Granting asylum to the Tibetan refugees on humanitarian grounds is considered as of the most significant step, because India was not a signatory to the 1951’s Refugee Convention, and still pioneered speculation.

In 1971, the refugee crisis happened during the Bangladesh’s war of Independence. Millions of people migrated from Bangladesh to India, after seeing the government’s conflict with the Pakistani forces. It is estimated, more than 10 Million Bangladeshi refugees escaped in 1971 and took shelter in India.

In 1989, Myanmar started suppressing the pro-democracy[11] movement in the country, due to which 3,000 nationals took refuge in India. These people were accepted as Refugees by the Indian Government. Similarly, this also happened in the case of Sri Lankan Tamil Refugees, the Afghan refugees, the Rohingya refugees and Chamka and Hejong refugees.

India serves as a home for the largest refugee population in South Asia. Under the legal framework, the Indian nationality law is governed under the Citizenship Act, 1955, which includes creating a National Register for Citizens. This act is amended numerous times but the 2019 Amendment of the bill has created some haphazard in the country. This law follows the idea of jus sanguinis (granting citizenship by descents) not by jus soli (granting citizenship by birth, within the territory). The bill was passed in December 2019, which states that the persecuted minorities such as Hindus, Christians, Sikhs, Buddhists, Jain and Parsis, who came from the Afghanistan, Pakistan and Bangladesh before 31 December 2014 would be eligible for Indian Citizenship. The main concern is the lack of inclusion of non-Muslims around India.

India has unfailingly been an accepting nation; it has provided and been a home to refugees belonging to all religions and sects. Since independence, India has received refugees not only from neighboring states but also from distant ones such as Afghanistan, Somalia, Sudan and Uganda.

At the Global level, the United Nations High Commission for Refugees (UNHCR) is United Nations bureau with the objective of protecting refugee rights, forcibly displaced people and stateless people[12]. The 1951 Convention also know as 1967 Protocol was established in order to review and upgrade the status of refugees. The World Refugee Day is celebrated on 20 June, to raise the awareness about the refugees and their living conditions, to protect their human rights and proclaim their strength and courage

It should be appreciated that a person becomes a refugee because of circumstances, which are beyond that person’s control, often poignant.

[1] A state-sponsored mass murder of some 6 Million Jews and others by Nazis during the period between 1941-45.

[4] A ruler in ancient Egypt

[5] The deliberate killing of a large group of people, of a particular ethnic group

[6] A written law passed by a legislative body

[10] Elimination of all forms of Discrimination Against Women