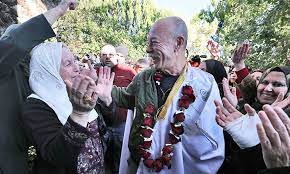 Maher, 65, was freed from the Eshel prison in southern Israel, close to Beer Sabe’ (Beer Sheva).
Maher visited his father’s grave after being freed; he passed away in 2008. When he arrived at his house, when he was taken into custody at the age of 25, his mother overwhelmed him with flowers.

He was detained In 1983 and later charged with the murder of an Israeli soldier in the 1980 Israeli occupation of the Syrian Golan Heights together with his cousin Karim Younis.
Maher and Karim received hanging as their method of execution. Their first sentence of 40 years in jail was then modified to life in prison in 2011.

Maher held the position of Dean of Prisoners for the preceding two weeks; until his cousin Karim was released on January 5, 2023, no one else had held that position.
According to the Prisoners’ Club, Israel imprisons 4,700 Palestinians, including 150 minors and 29 women.

Arundhutee Bhattacharya is an undergraduate, currently pursuing a law degree, five years, integrated BALLB honors program From. She is currently associated with Legal Research & Analysis as an intern of the prestigious Legal Journalism Programme, her astounding work has been recognized well in the organization, and she is indeed reliable for her swiftness and writing skills. Serving as the Campus Ambassador, and also anchors podcasts for Legal Research & Analysis, widely available on Spotify, Jio saavn, airtel wink music, amazon prime, etc. Legal Research & Analysis feels proud to have hosted such an emerging talent and wishes her luck and massive success in her future endeavors.