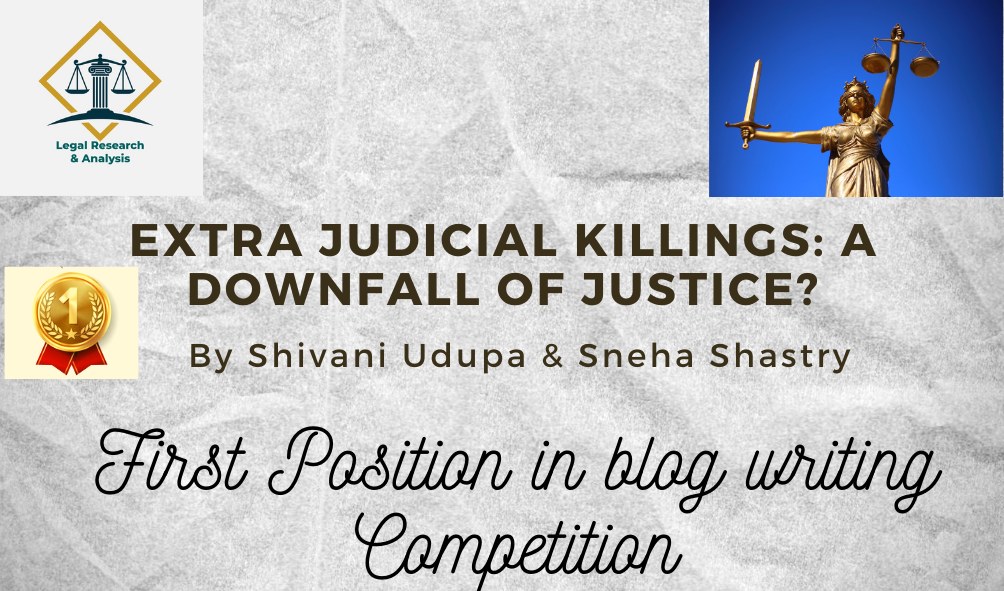 “Justice cannot be for one side alone, but must be for both”- Eleanor Roosevelt

Our Indian judicial system also believes in the saying that even if thousands of criminals are set free, one innocent should never be punished. Every accused in our country is given many chances through various judicial remedies and appeals to prove his stance of truth. This is done with the sole purpose to ensure that true justice is achieved with rationality, reasonableness, facts and proper investigation for both sides of a case. Not through mere anger, rage or a place where no reasonable doubt can exist. The power to decide who is right or wrong is bestowed to the judiciary. It seeks fair justice and punishes the wrongdoer without making it an act of revenge. Extra Judicial Killings should undoubtedly stop.

The practice of encounter killings came into light in India from the late 20th century which was supposedly done by the police as an act of self-defence. It has been appreciated as a resort for instant justice ever since. Unfortunately, now we come across many fake encounters done as an act of self-righteousness rather than an act of self-defence, making it a new norm of the police justice system. The NHRC, a statutory body registered 211 fake encounter cases all over India from 1st Jan 2015 to 1st Jan 2019[1].

Section 46 of the CRPC allows the police officer to use force to an extent of causing death if it’s done in the course of an attempt to arrest an accused charged with an offence punishable for death or imprisonment of life. However, when the police officer is acting outside his purview of duty, he can be held accountable in the same manner as a normal citizen and wouldn’t be entitled to legal protections available to a police officer. In case of fake encounters, they will be held liable for culpable homicide. Their actions during such happenings won’t be treated as them acting as a police officer but as a citizen of the country.

Whenever such encounters take place we come across dual reactions to it. One side applauds these encounters if the person facing it is an atrocious criminal or an accused who committed a heinous act. Whereas the other side discourages such encounters in the name of justice as an individual had to confront death without being given a fair chance to represent himself.

In the infamous 2019 rape case, where the four accused raped and burnt the victim to death in Hyderabad, we saw the public hooting and showering flowers on police while celebrating the alleged encounter of the four accused. Many politicians and celebrities also applauded the actions of the police. But only a fragment of the public believed it to be unjust as we succumbed to vengeance rather than seeking every facet of truth through due process of law.

In most recent encounter case of the dreaded criminal, Vikas Dubey who had 64 cases of serious crimes against him, no one disputes that he didn’t deserve to meet his nemesis but the manner in which it was achieved leaves us with many unanswered questions resulting in a majority of public not rooting for the encounter and questioning the actions of the authorities. Was it an attempt to distract people from the bigger evils in the society while celebrating his death? Why was a notorious criminal like him not handcuffed?

There are many such loopholes that we find in every alleged encounter. The authenticity of an encounter can be only established through a proper investigation. In People’s Union for Civil Liberties & Anr Versus State of Maharashtra & Ors. [2] SC gave 16 points of guidelines to be followed for investigating encounter killings. But we need more stringent binding laws regarding the same rather than mere guidelines.

It’s also a fact that the public reacts differently as seen in the above two cases; therefore the duty of the police is not to get swayed by the public sentiments and act in regard to procedures established by law. The judiciary will decide the fate of an accused without being stirred by the reactions of the public.

Not every encounter by police is done with the good conscience as it’s several times backed by political influence and personal vendetta.

In the 2006 case of Tulsiram Prajapati [3] he was allegedly killed in an encounter while in judicial custody. According to the CBI, he was a key eye witness of another alleged encounter of Sohrabuddin Sheikh and his wife in 2005 and henceforth was eliminated. Amit Shah, present Minister of home affairs was arrested in 2010 as one of the prime accused, but all accused were acquitted due to lack of evidence. 23 witnesses out of 25 turned hostile when they were summoned to the court.

It was clearly seen that all links to the political conspiracy were deliberately side-lined to illustrate it as a genuine encounter.

In Prakash Kadam and Ors. v. Ramprasad Vishwanath Gupta and Anr.[4] The accused tried to eliminate the deceased in an alleged encounter by engaging the police and the staff. The court observed the police and staff acting as contract killers for a private individual in this case and weren’t excused for murdering in the name of “encounter”.

Sadly, the law made to ensure the safety of police is being abused and misused for reasons beyond the moral ground of ethics and duty, turning them from protectors to predators.

We are a democratic state where citizens possess an individual right. The citizens who encourage such encounters due to the rage of heinous crimes often forget the legal aspects. The police have sometimes acted recklessly when the public hue and cry loud against odious crimes. When we talk about Extra Judicial Killings being a democratic nation, we should adhere to constitutional norms and due process of law rather than turning into a society cheering for retributive justice.

Article 21 of our constitution gives the right to life to every citizen. The due process of law which is established is embedded in the constitution. Right to life is inclusive of Right to fair trial for an accused. Even the state cannot violate it, an accused has to be put on trial as per the CrPC, he should be informed of the charges against him and should be given an equal opportunity to defend himself under Article 14 of the constitution. It’s the responsibility of the police to uphold constitutional principles made for every individual of the state whether he’s an innocent, accused, or a criminal.

The characteristics that entitle extra judicial killings are varied and intricate from one country to another. In countries like Kenya, U.S.A, and Brazil the police embezzle the power of self-defence granted to them causing threat to the public safety. The casualties of extra judicial killings in the U.S.A are often minorities such as blacks while in Brazil, they are impoverished and in Kenya, they are the immigrants such as Somalis. This shows that these attacks are based either on colour or religion. The parallels in India are also impunity and power. In UP vulnerable social groups such as Muslims and Dalit’s are targeted.

When police perform such staged encounters they are completely ignorant of their duty. Encouragement for extrajudicial killings comes with the fact that people know there will be delayed justice if they go through fair trial, resulting in people questioning the credibility of the criminal justice system.

As per the Bertelsmann Stiftung’s BTI 2020 Country Report[5], the main problem with Indian judiciary for delayed justice in the hearing of cases is due to understaffing. This has led to a massive backlog of currently 3.3 million cases and extremely long periods of detention when awaiting trial. SC alone has almost 58000 cases that are pending and 2/3rd of Indian prisoners are awaiting trial. This indicates the limitation posed on the functional operability of the courts leading to people believing in other illicit means such as fake encounters as an alternative choice to justice.

Secondly, we know many judicial remedies are available for an accused because our judiciary believes in the justice of the victim as well as the accused, removing these remedies wouldn’t meet the requirements of being just, fair and reasonable as per the Article 21. But we can make it more effectively time-bound to curtail the misuse. As we also witnessed in Nirbhayas case where the convicts misused the legal remedies to delay the conviction and waste the court’s crucial time and resources. The curative petition is the last constitutional remedy available for any aggrieved party. However, there is no limited time frame stipulated for filing the same. Such discrepancies need amelioration to remove undue delay in trying cases.

An individual’s behaviour is such that they react recklessly as emotions influence their decision, this being applicable to not just the police but also the citizens. In encounters, there’s a total disregard to the law while masking the factual truth. Plentiful of the population find such executions gratifying, but it’s undisputedly illegal. The police conceal the event in the name of ‘speedier justice’. We have stacks of suits leading to a stagnant growth in the judicial system and government needs to make amendments for reforming it. It’s also erroneous of the public asking for reforms while they still embrace such illegal means to orate the imperfections of the judicial system. Highest authorities and influential people of our country need to demonstrate their opposition to such extra-judicial killings. Our country needs to guarantee protection to individuals and groups who are in danger of extra judicial killings. Independent investigations have to be carried out impartially under proper supervision of a regulatory body. The hapless victims of an encounter are withdrawn from the opportunity to stand for a trial, ending any forlorn hope of getting justice. We as a Democratic country should only endorse fair trial for justice and believe that every individual is “innocent until proven guilty”.