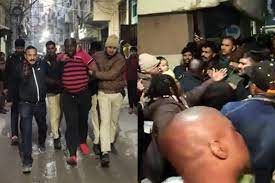 A large violent mob of 200-300 African nationals encircled and battled with a police team in the Neb Sarai neighborhood of South Delhi after the cops captured five Nigerians. The
Nigerians, whose visas had expired, were being transported to the police station when a mob gathered and blocked their path. They were successful in releasing Nigerian nationals who had been held by the anti-drug force due to visa expiration.

Five foreign people, all from Nigeria, were apprehended by a squad of narcotics cells in New
Delhi’s Neb Sarai district after their visas were allegedly overdue. The deportation process
had allegedly begun, according to the police. Sub Inspector Narender Si Rajaram, ASI
Surender, ASI Ramesh, Head Constable Kuldeep, and Captain Arun made their way to Raju
Park in New Delhi to begin the deportation process for foreign individuals who had
overstayed their visas. The crew captured three African nationals whose visas had expired at
around 2:30 in the afternoon.

Philip (22), a native of Lagos, Nigeria, was named the man. In pursuit of foreign nationals
overstaying in India, a joint team from the Narcotics squad and Police Station from Neb Sarai
arrived at Raju Park and captured 4 African citizens, among them a woman.

Detained foreign nationals
Police described the detained foreign nationals as knee Chukwu (53), whose passport was
taken, Igwe Emmanuel Chimezie (33), who was unable to provide any documents, Aziegbe
John (24), for whom efforts are being made to locate his paperwork, and Queen Godwin (26),
whose visa has expired. “But once more, between 150 and 200 Africans gathered there. They
attempted to aid the imprisoned African nationals in escaping, but the police team was
eventually successful in transporting them to Police Station Neb Sarai “.According to police,
“the deportation proceedings of detained foreign Nationals have begun.”